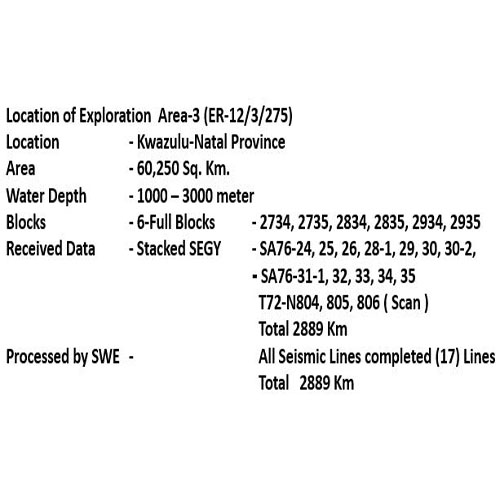 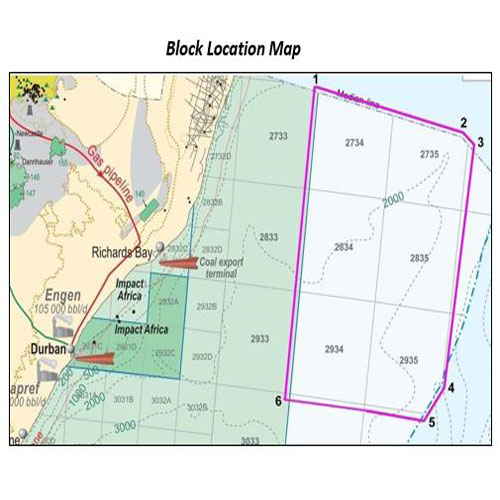 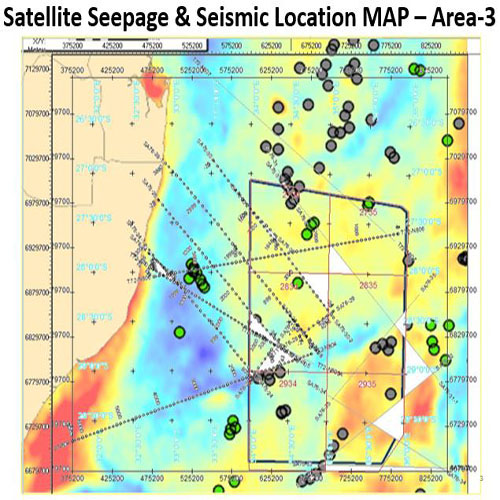 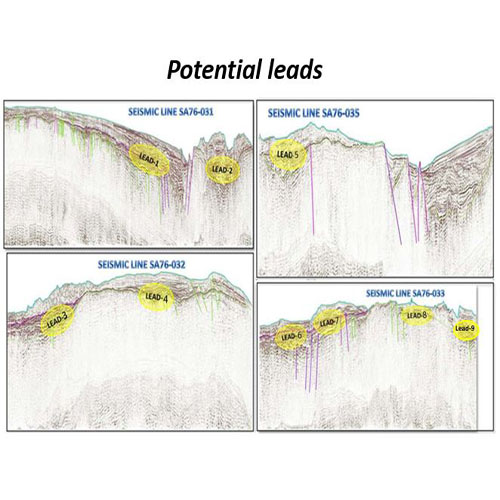 AREA-3 (ER-12/3/275)
Silver Wave's Area 3 acreage in the Durban and Zululand Basins is situated adjacent to structures with billions of barrels of upside hydrocarbon potential and due east of Silver Wave's highly prospective previous acreage which was recently acquired by Exxon Mobil. This acreage is also situated in the heart of the southern Mozambique Channel which has confirmed commercial discoveries to the north in Mozambique.

Collectively, Silver Wave holds highly prospective acreage that requires an to define prospects and leads within such acreage.

The Area covers an area of 60250 sq km in the water depth ranging from 1000 to 3000m. The area is bounded by Durban basin and Natal valley to the west and South-west; Mozambique ridge to the east and north east; Zululand basin to the northwest.

There is very limited seismic data, only 17 lines (2889 LKM), which are sparsely distributed in the block. Based on the seismic data analysis, nine turbidite leads, one flower structure lead, one Cretaceous wedge lead and two basement lead have been mapped.

The acquisition of modern seismic data is regarded as essential for further exploration.

Risk Perception
The block size is over 60,000 sq. km and some drilling has taken place in the vicinity of the Area-3 block. There is very limited seismic data, only 17 lines (2889 LKM) which are sparsely distributed in the Area.
Therefore, risk perceived at this time can be mitigated through acquisition of more closely spaced 2-D seismic data in the most prospective areas to generate potential leads and high grade prospects.

Resource Summary
Based upon the existing seismic data analysis, twelve leads have been identified in turbidites, flower structure, wedge out and basement related structural feature. Due to limited geoscientific data (especially seismic), resources have been estimated in specific prospects/ leads with single line seismic control.
However, huge oil & gas resources with over Three billion barrel potential are present in the blocks operated Exxon Mobil and ENI International in the west of the Area-3.
The Area is located in deep water, 1200m to 2600m which will require expensive drilling/ development campaign.
The size of the discovery has to be quite large to sustain the above cost. 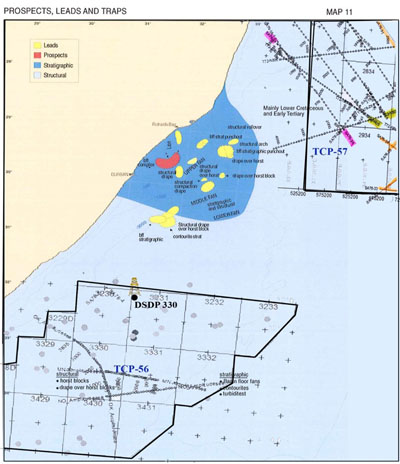 Satellite image study
- Continued Satellite Image Study and received final interpretation report from JGI Inc. in March 2014.
- 50 slicks are low confident candidates (Rank-4). Two slicks of Rank-4 samples are interpreted as being probable seepage slicks with medium confident as being probable oil seepage slicks with medium confident Rank-3 considering that the distance between close end of slicks is less than four times of the water depth.
- Therefore it may be concluded that the leads in the Area-3 are expected to be Oil prone. 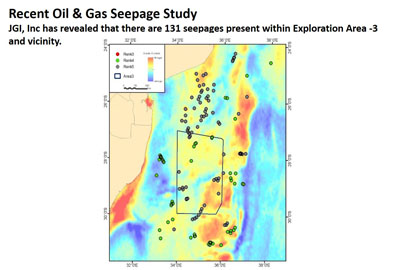 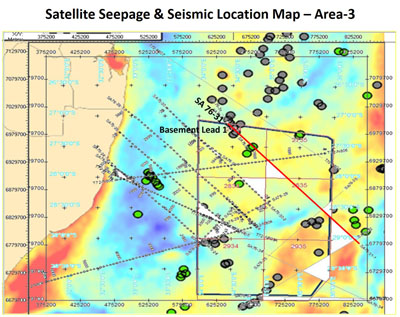 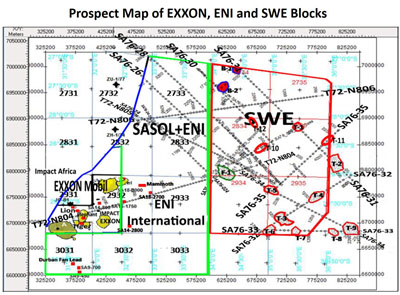 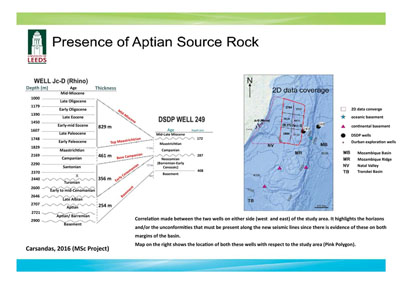 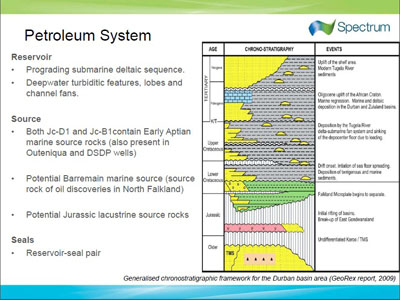 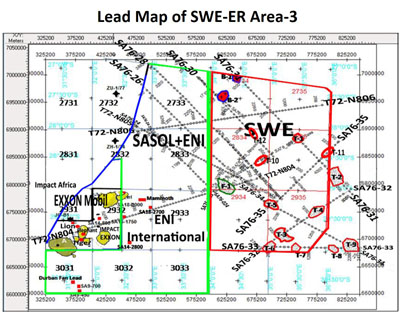 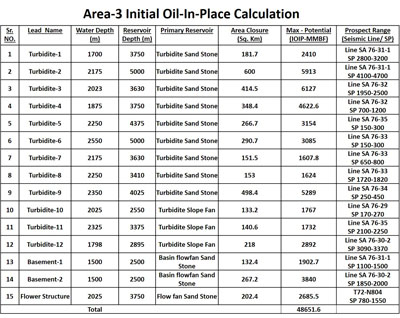 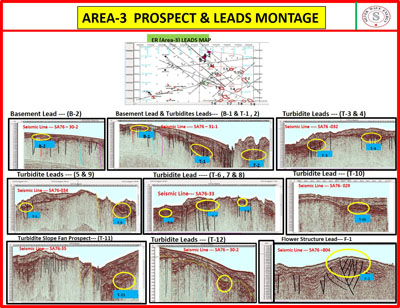 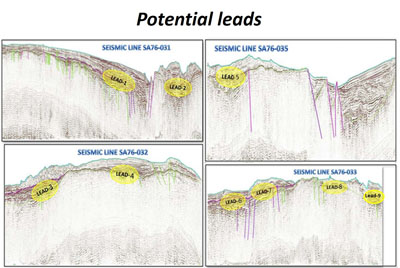 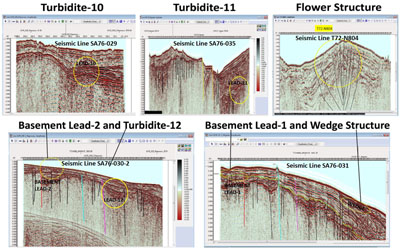 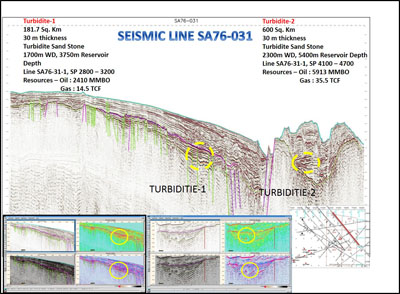 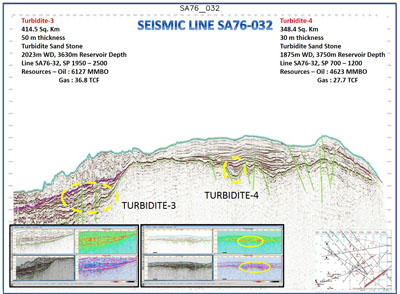 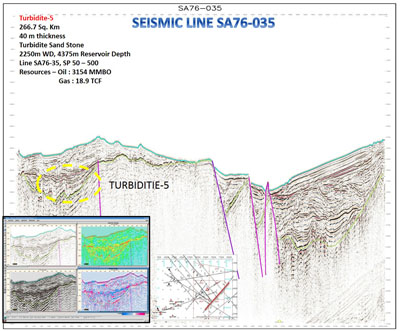 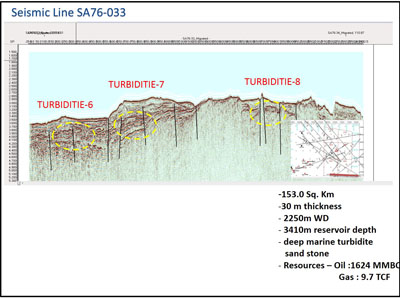 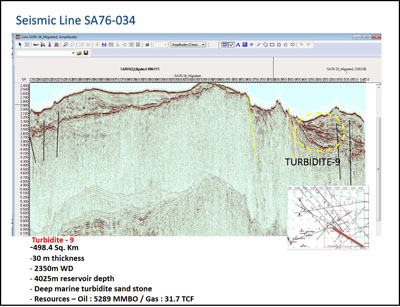 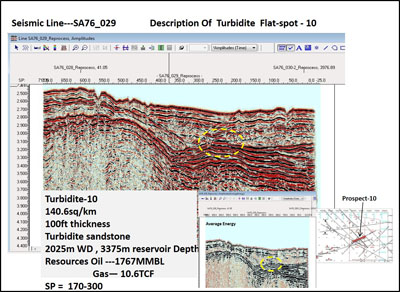 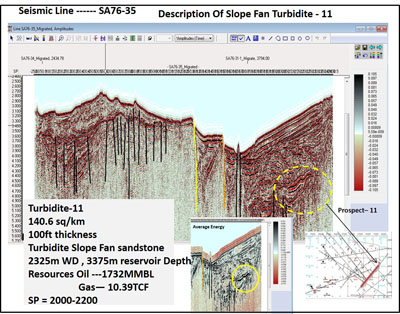 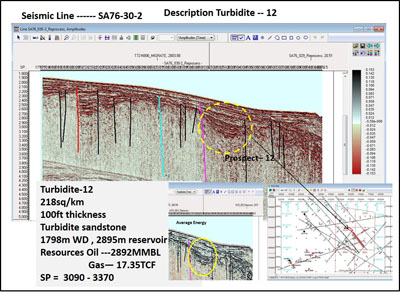 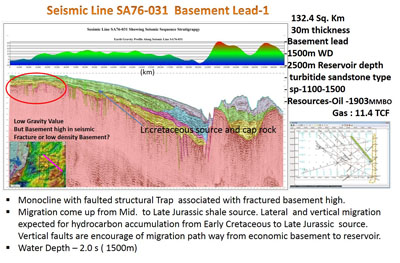 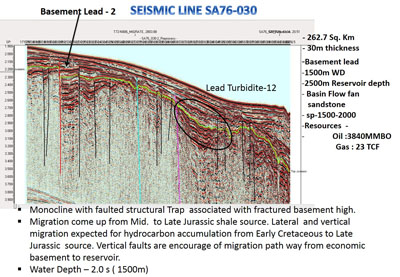 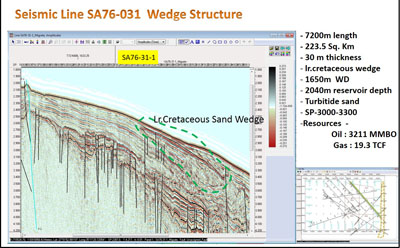 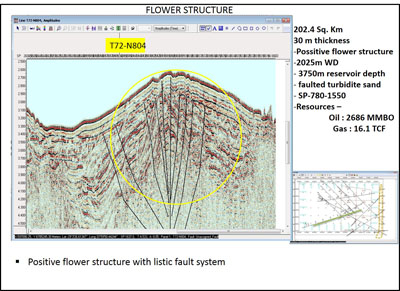