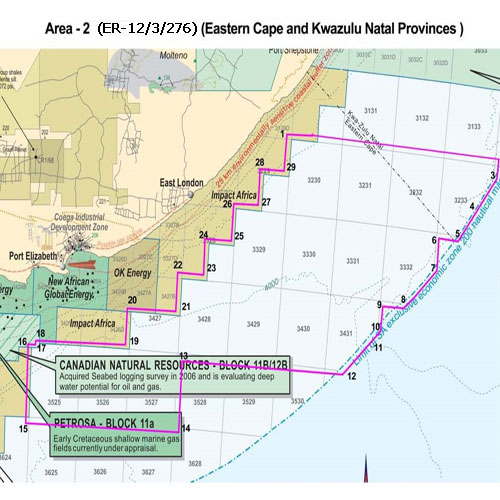 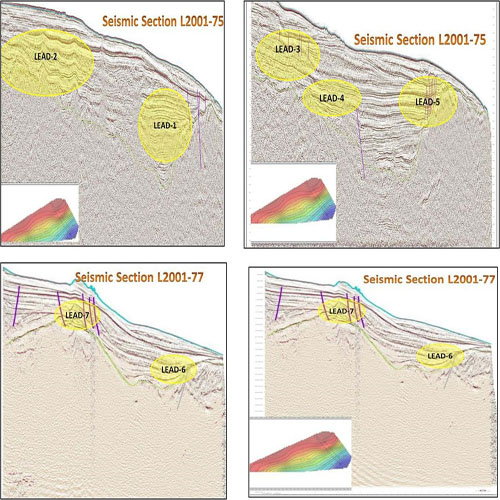 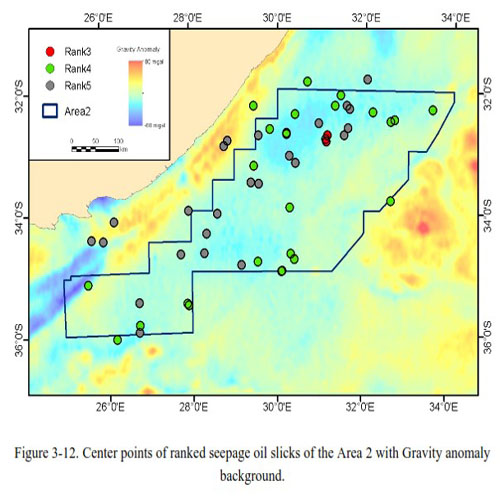 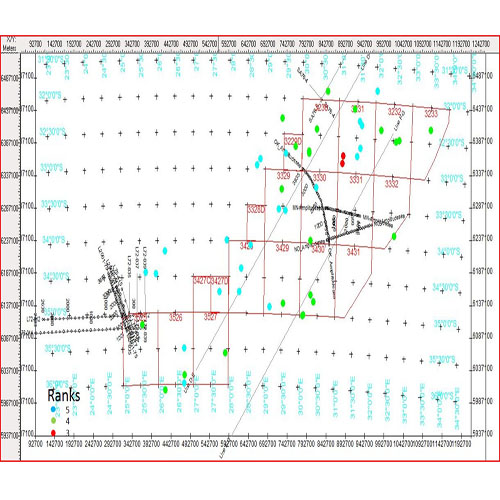 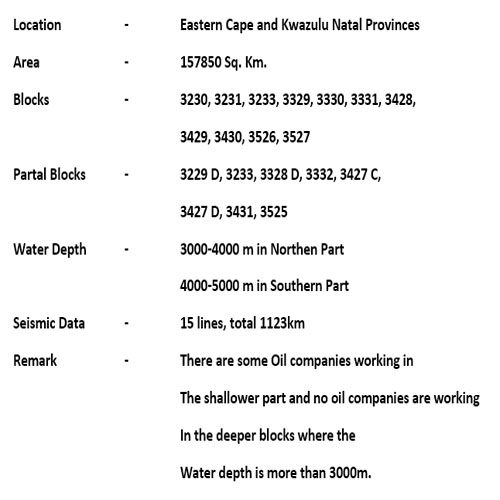 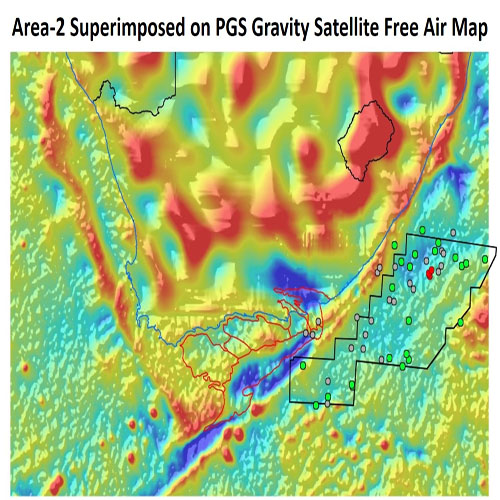 Regional Tectonic
The southeast coast of Southern Africa can be classified as a sheared with a history strongly affected by the breakup of Gondwana, the motion of the Falkland Plateau southwestward of Africa, the development of a continent-ocean transform depicted by the Agulhas fracture zone followed by rifting of the Agulhas Plateau and Mozambique Ridge from Africa and Antarctica and the formation of pull-apart basins The crustal structure characteristics of the sheared southeastern margin of the African continent, bordering deep ocean basins and marginal plateaus are yet poorly defined and form the main question addressed in this work. The formation processes and subsequent evolution of the region as recorded in the depositional history of the sedimentary section and in the special features of the deep crustal structure are also examined.

A number of geological lineaments define the eastern extent of the normal continental basement.

The Lebombo Line which follows the crest of a major isostatic gravity anomaly partly produced by the thick Lebombo volcanic sequence and partlydue to mass excess beneath the continental rise.

Seismic refraction studies confirm that the southern Natal Valley and the Transkei Basin are underlain by normal oceanic crust. Recognition of a series of magnetic spreading anomalies east of the Agulhas Fracture zone, further confirms the oceanic origin of the region.

Natal Valley and Stratigraphic Framework
DSDP Corehole sites 327, 330, and 511, located only about 10km apart, were drilled near the northern edge of the Falkland Plateau at the eastern end of Maurice Ewing Bank which was split out of the abyssal depression denoted as the Natal Valley where, the said Coreholes are located within the northern boundary of our study Area-2 of Block ER 276. Coreholes at the sites penetrated equivalent to the oldest sediments on the Natal Valley.
However, as the coreholes were drilled on a basement high, the total section sampled measured only 630m. Section thickness of the Natal Valley can exceed 7 km but the bottom 2-3 km may be sub-aerial volcanics and sediments related the initiation of rifting.
The oldest sediments, of Middle Jurassic to Oxfordian age, occur as a 2.7 m layer of continental, lignitic siltstone overlying granitic basement in DSDP Corehole 330.
Immediately overlying the siltstone is a 7 meter deposit of transgressive marine sandstone. The sandstone is clean, well-sorted, and medium-grained. It is described as high-energy, quartz-rich sandstone (Thompson, 1977); although no porosity measurements were made, it appears to have good reservoir properties.

Total Organic Carbon(TOC CONTENT)
Organic rich, sapropelic sediments were deposited from Late Jurassic through Aptian time’s at all three sites, although the exact lithology and organic facies vary slightly between the sites. Black, massive, thinly-laminated mudstones were probably deposited under reducing conditions in the basinal region of the Natal valley at Site 511.
These are the richest sediments sampled in our study area. TOC values average 3.8% and the kerogen is predominately amorphous. The equivalent units at Sites 327 and 330 are olive gray and black limestones.
Site 327 averages 2.88% TOC and has slightly more amorphous kerogen than does Site 330, which has an average TOC content 1.96%. Pyrolysis results indicate that the amorphous material at all their sites is hydrogen rich and oil prone.
Relating the above source rock interval to offshore Natal, it would appear to fall between the Base (Upper) Jurassic pick and the 13At1 pick. This stratigraphic interval represents a considerable sediment thickness.At all three sites, this oragnaic interval is caooed by a late Aptian-Albian sequence of variously coloured nannofossil clays, chalks and mudstones. These sediments are rich in terrestrial organic matter and low in organic carbon.
This may reflect to more oxidizing conditions associated with an Aptian-Albian regression (Gilbert, 1984), or more likely to the opening of the South Atlantic Ocean with the separation of the Falkland Plateau from Africa.

Source rocks
DSDP Coreholes 327, 330 and 511 provide evidence of good quality marine source rock in the late Jurassic.
As described above, these coreholes encountered a total of 225 m of carbonaceous claystones of Oxfordian to Aptian age. These laminated sediments were deposited in anoxic ranges up to 6 percent and the cores exuded a strong petroliferous odor.
DSDP source rock evidence 500-900 meters from the present area of exploratory interest. The Coreholes are located on a basement high at the opposite end of the suggested Natal valley rift. Their pre-rift location would have been near East London, South Africa.
This source rock could be matured both in far offshore South Africa Block 18 and Mozambique Block 20. Late Jurassic source shales have been reported from outcrops in western Mozambique.

Reservoir Rocks
As the DSDP coreholes on the Falkland platform were purposely drilled on a basement high, abundant reservoir were neither expected nor encountered. In Corehole 330, the only one of the group to reach basement, the 7m transgressive sandstone encountered in the Late Jurassic indicates an important marine transgression across this regional surface, and correlative sandstones are likely to be found in other locations.
Late Jurassic transgressive sandstone and Late Cretaceous Deep Marine Turbidite basin flow fan sands are good quality reservoir rock.

Petroleum Traps
Areas of the Natal valley rift contain many apparent structural traps, mostly related to the rifting that separated from the African Plate.
Similar trapping styles are present in the Durbin and may the anticipated in the area of the Block Area-3.
SEAL – Late Tertiary marine shale are major seals.
PLAY TYPE – Deep sea fans, turbidite channels, stratigraphic pinch outs.
Lower parts of the Tugela fan (Cretaceous) may be encountered in the northern blocks of the Area-2.
Turbidite sands with leeves & channel infill can be expected in the upper fan.
The middle fan may have supra fan lobes and proximal turbitidites sands.
Distal turbidites and possible supra fan lobes can be expected in the lower fan.
Late Jurassic Marine Oil prone source rock (3.5 to 5 % TOC) along with volcanic ash which indicated increase heat flow can create oil prone petroleum system.
The deeper leads (Oribi drift) along oil seepage indicate good possibility for oil and gas to exist in central blocks of the Area-2. 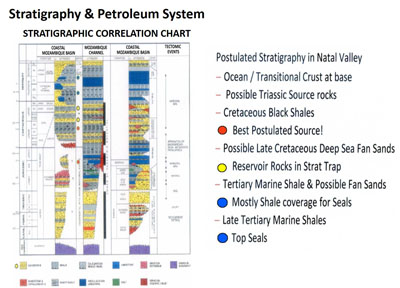 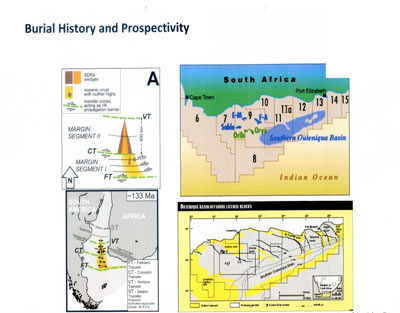 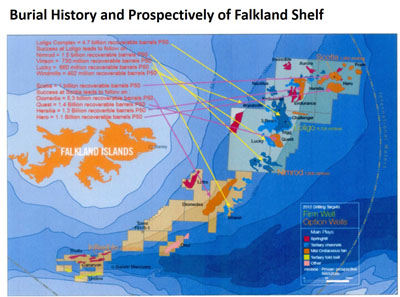 Area 2 (ER-12/3/276)
The block covers a huge area of 157850 sq km in the water depth ranging from 3000- 5000m in the Eastern Cape and Kwazulu Natal Province which has been poorly explored. This is a rank exploratory block where no drilling has taken place in the vicinity of block. There is very limited seismic data only 15 lines (1123 LKM) which are sparsely distributed. Acquisition of airborne gravity / magnetic & seepage study followed by more closely spaced 2-D seismic data is planned. Lower parts of the Tungla fan (Cretaceous) may be encountered in the north portion of the block. Turbidite sands with leeves & channel infill can be expected in the upper fan. The middle fan may have supra fan lobes and proximal turbitidite sands. Distal turbidites and possible supra fan lobes can be expected in the lower fan. Late Jurassic Marine Oil prone source rock (3.5 to 5 % TOC) along with volcanic ash which indicated increase heat flow can create oil prone petroleum system. The deeper leads (Oribi drift) along oil seepage indicate good possibility for oil and gas to exist.

Seven potential leads have been identified based on the preliminary interpretation covering deep sea fans, turbidite channels, wedge outs and structural inversal on the shelf/ slope. The in place volumes could be in the range of 500 to 1000 MMBBL oil equivalents but in the ultra deep waters. The drilling and development campaign could be very expensive. 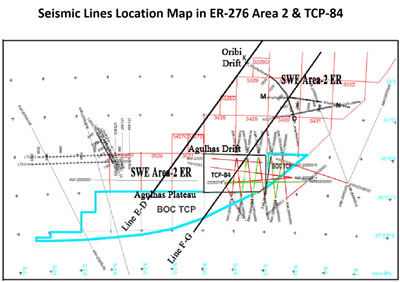 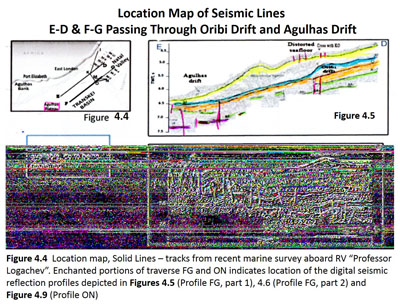 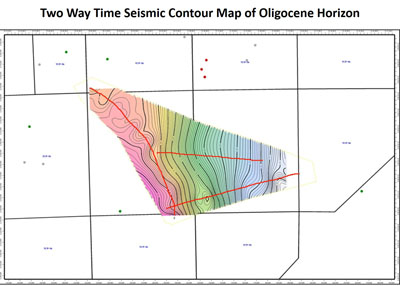 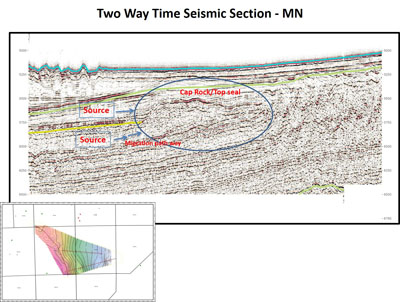 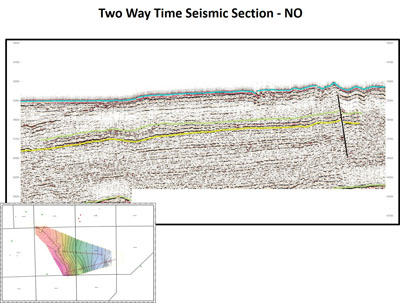 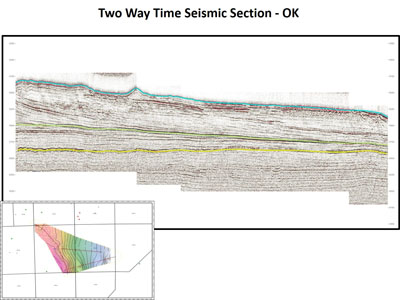 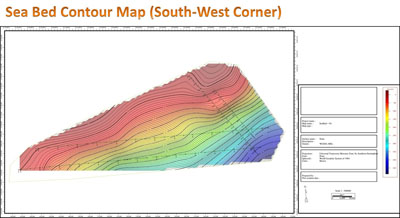 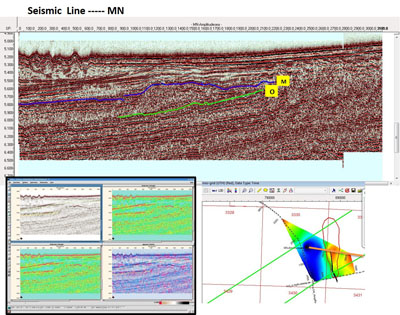 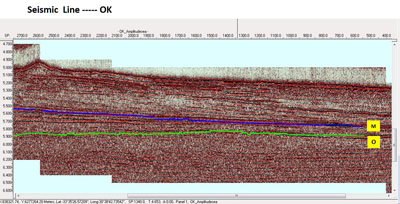 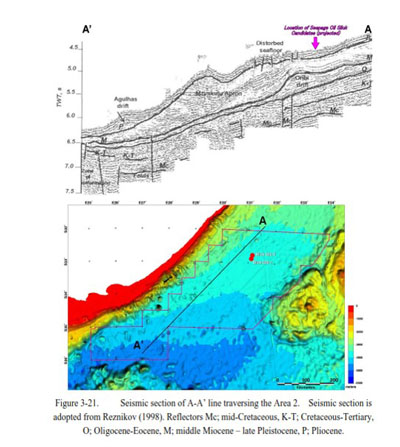 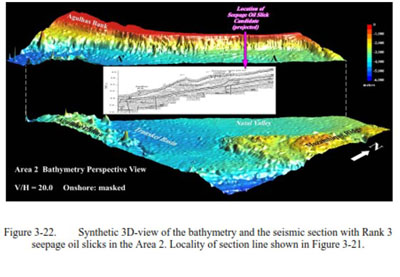 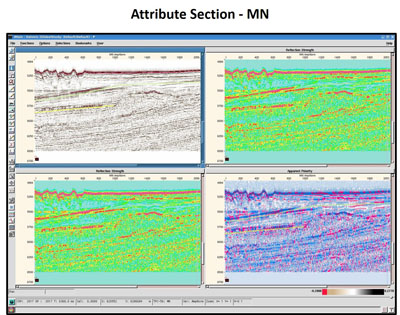 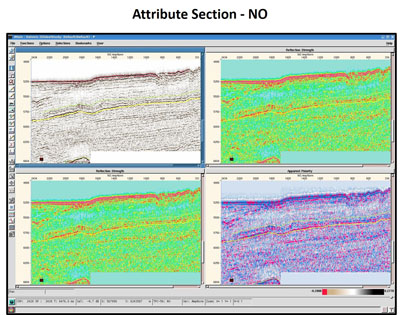 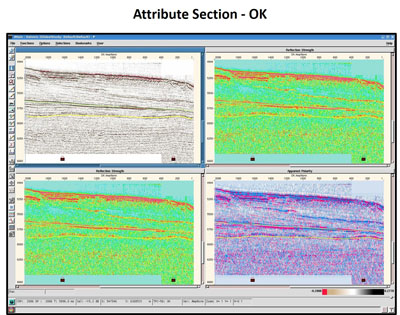 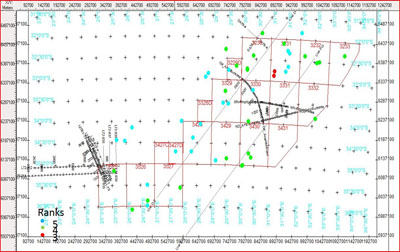 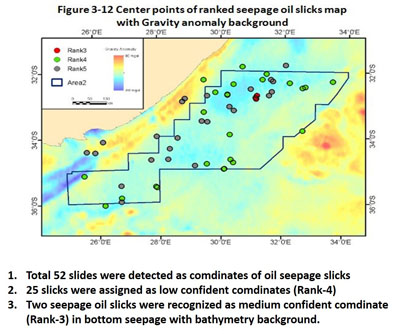 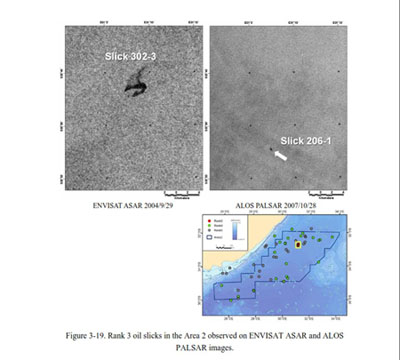 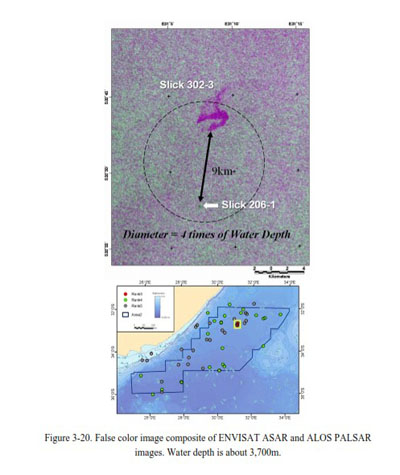 Two Slicks in the Area-2 are interpreted as being probable seepage slicks with medium confident ( Rank-3 ). A tip of one side of these slicks can be seen more or less the same location in the images observed on different date ( 302-3 and 206-1 )